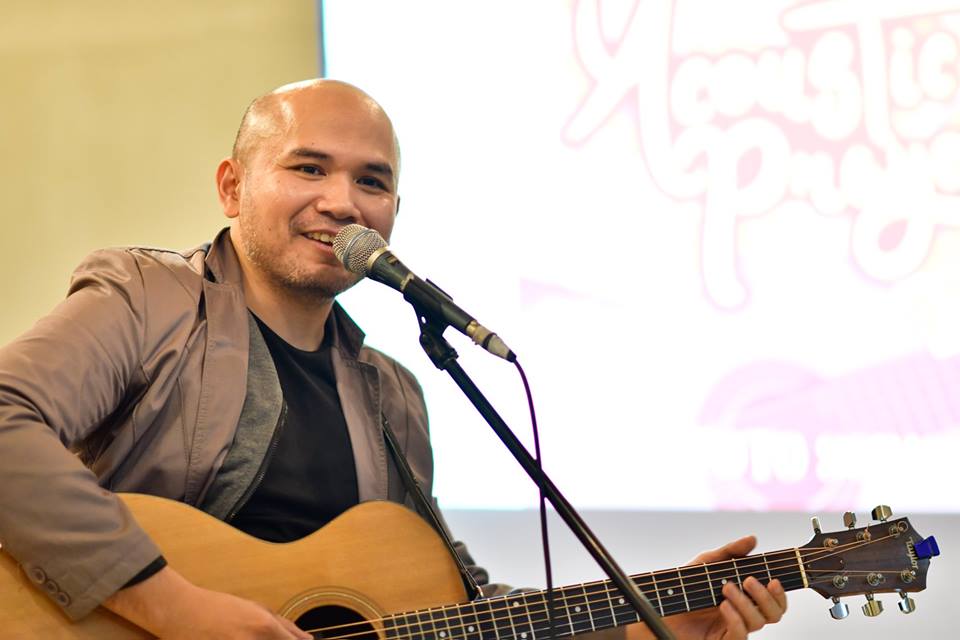 In a mini-concert dubbed “An Evening of Acoustic Prayers”, members of the Ateneo community were delightfully treated to the heartrending and soulful music of award-winning singer-songwriter, Toto Sorioso.

JesCom Executive Director, Fr.Nono Alfonso SJ, recalled fond memories of the evening’s selected venue during his opening remarks.
“Apart from being close to the college students, this place holds fond memories for many. From the mini concerts of Bukas Palad to Sr.Bubbles Bandojo, the sound here was so heavenly because of the music they created,” Fr.Nono recounted.

“Being part of ACIL in my college days, the masses we hosted here gave strength and consolation for many, including my fellow Jesuits. Many Ateneans could say this chapel formed, nourished them, and we continue the tradition of this sacred place-as we pray, sing, worship and encounter God this evening.”

Jesuit Scholastic, Bro. Jasper Martir, reminisced of a chance conversation he had with the renowned Fr.Manolig Francisco SJ, about the unique inspiration behind one of his favorite compositions “Gabing Kulimlim”.

Ms.Rina Simpas of the Office of Campus Ministry shared her profound insights of remaining in God’s love and recited another Eduardo Calasanz’ piece “Awit kay Ana”. This paved the way for a harmonious duet between Sorioso and talented vocalist Yvette Farcon of the UP College of Music, for “Pananatili” by Noel Miranda.

After his back to back singing of “Walang Pagmamaliw” and “Laging Nandyan”, Sorioso called on the audience to sing-along to “Tayo Tayo Lang” and finally capped off the evening with an encore performance of “Wag Mong Isipin”, his 2010 FILSCAP songwriting competition grand-prize winning entry.

“Acoustic Prayers” makes its official launch this Thursday, February 14, 7:00 pm with a live concert at the UP Town Center Activity Area. Admission is Free.

CD’s of “Acoustic Prayers” will be available at the concert proper. Beginning with “Pananatili”featuring soprano Lara Maigue, singles will also be released on February 14 on digital music platforms and can be streamed via the following links: