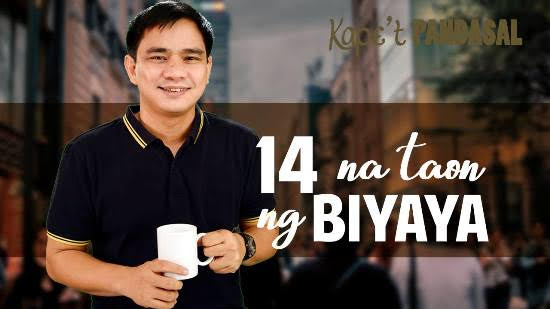 For Jesuit Communication Foundation’s (JesCom) landmark daily prayer and reflection program Kape’t Pandesal, the journey that began more than a decade ago- to its 14th-anniversary celebration this October, the Month of the Holy Rosary- has been a remarkable ride indeed.

“It is quite overwhelming. 14 years is a lifetime for any TV show,” attests JesCom Executive Director Fr. Nono Alfonso SJ, “We are jubilant and yet humbled by its success. And we can only thank God because this is all grace!”

Speaking of God’s grace coming at the most opportune times, Fr.Nono’s entry into the Kape’t Pandesal family was a pleasant surprise in itself.

“First of all, I was never meant to be part of the Kape Team. (Xavier School chaplain) Fr. Xavier Olin backed out from the show because he said that he was a shy person; so last minute they needed a talent and got me out of desperation. But it worked, so they retained me,” Fr.Nono fondly recalls.

Ever since his serendipitous inclusion to the Kape’t Pandesal fold, lasting memories, and countless heartwarming gestures abound for Fr.Nono.

“The feedback we get from viewers is overwhelming. I was just approached recently by a young TV reporter and told me that he watched Kape since he was a child and whenever he felt down, it was Kape who would lift up his spirit. Wow!” exclaims Fr.Nono,

“Teachers in schools, we are told, use Kape for their morning prayer with their class; Filipino communities abroad asked our permission as well to play Kape in their community radios. To think that sometimes we thought we were just wasting air time. But like the parable of the seed that grows even without the farmer knowing it, Kape has grown and touched lives despite our doubts,” adds   Fr. Nono.

“The team is special because it represents the Church very well– we have a Cardinal, a priest, a lay person who is also a woman, a seminarian who has recently been ordained though, and a Mindanaoan, that is a priest based in Mindanao,” explains Fr.Nono, “So the team quite represents the many sectors of the Church. We are their voices, and that makes us really Catholic or universal.”

“I think it was because when we started out, we were the first to do it, to have a daily morning prayer segment in a big and most popular network like ABS –CBN,” recounts Fr.Nono, “We were the first to mainstream such a show, therefore. Also, the prayer reflections are short and simple and not formulaic.”

As Kape’t Pandesal opens a new chapter in its mission of evangelization, Fr.Nono visualizes great potential for growth in the age of digitalization.

“Ever since the digital age got underway, social media platforms like Youtube and Facebook have become new avenues or platforms for TV shows. Although we already broadcast Kape in these, we are limited though by the (Tagalog) language we use. YouTube and Facebook, of course, cater to an international audience and so we need either Kape’t or a version of it to be done in English so we can tap the bigger international audience,” suggests Fr.Nono.

“Secondly, we want to become more creative, so we would like to tap new talents to be Kape ambassadors to the world,” he continues.

But before looking ahead into what the future holds for Kape’t Pandesal, Fr.Nono took the present moment to express his heartfelt thanksgiving for the devoted early risers who find nourishment in their daily “spiritual vitamin”.

“We thank our followers through the years- especially those who wake up very early in the morning to catch us at ABS-CBN. We hope that we continue to inspire you and point you to our Creator, or simply, to wake your spirit up with our brand of Kape’t Pandesal.”